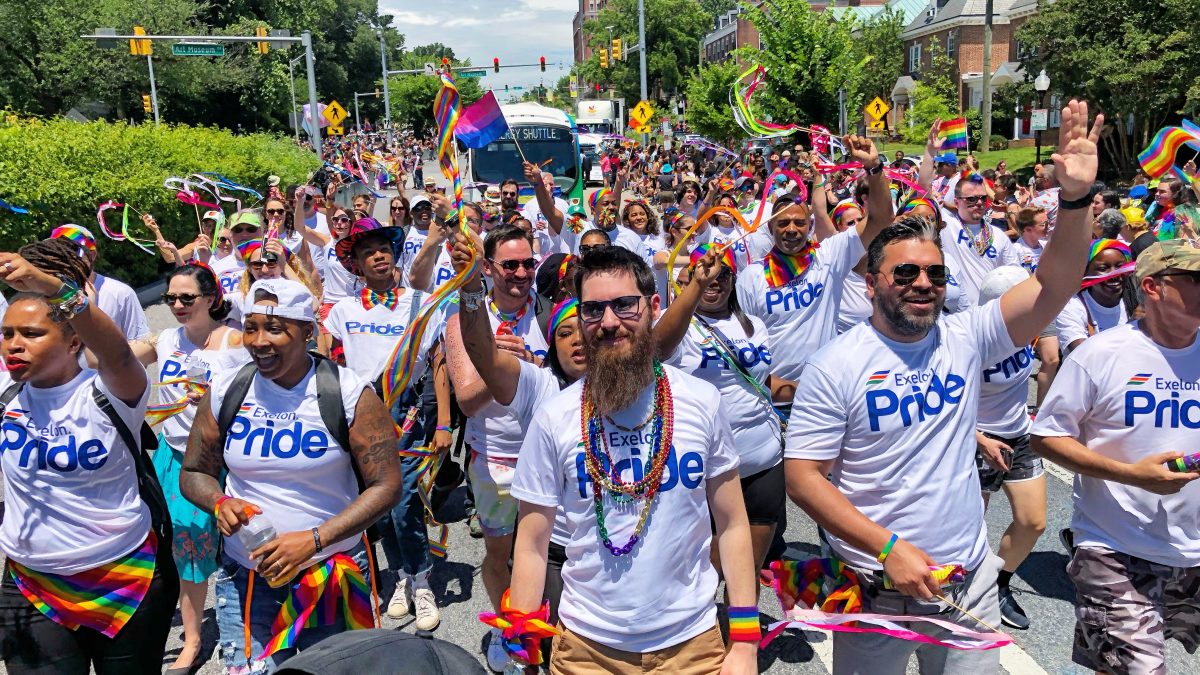 June is LGBT Pride Month, and in Baltimore all roads lead to Pride Weekend. The parade that highlights this citywide celebration attracts 30,000 people and more than 100 participating organizations to 11 blocks of North Charles Street, with a block party across the finish line. It’s a legendary annual event dating back to the 1970s.

Each year the Baltimore chapter of Exelon Pride, the company’s employee resource group that promotes a positive workplace environment for all Exelon employees regardless of sexual orientation, organizes a contingent of local parade participants eager to take an active role in Pride Month. The crowd behind the Exelon Pride banner on June 15, 2019, was the largest ever—more than 130 employees, friends, and family, all followed by a BGE zero-emission electric bus.

Here’s what they say inspired them: 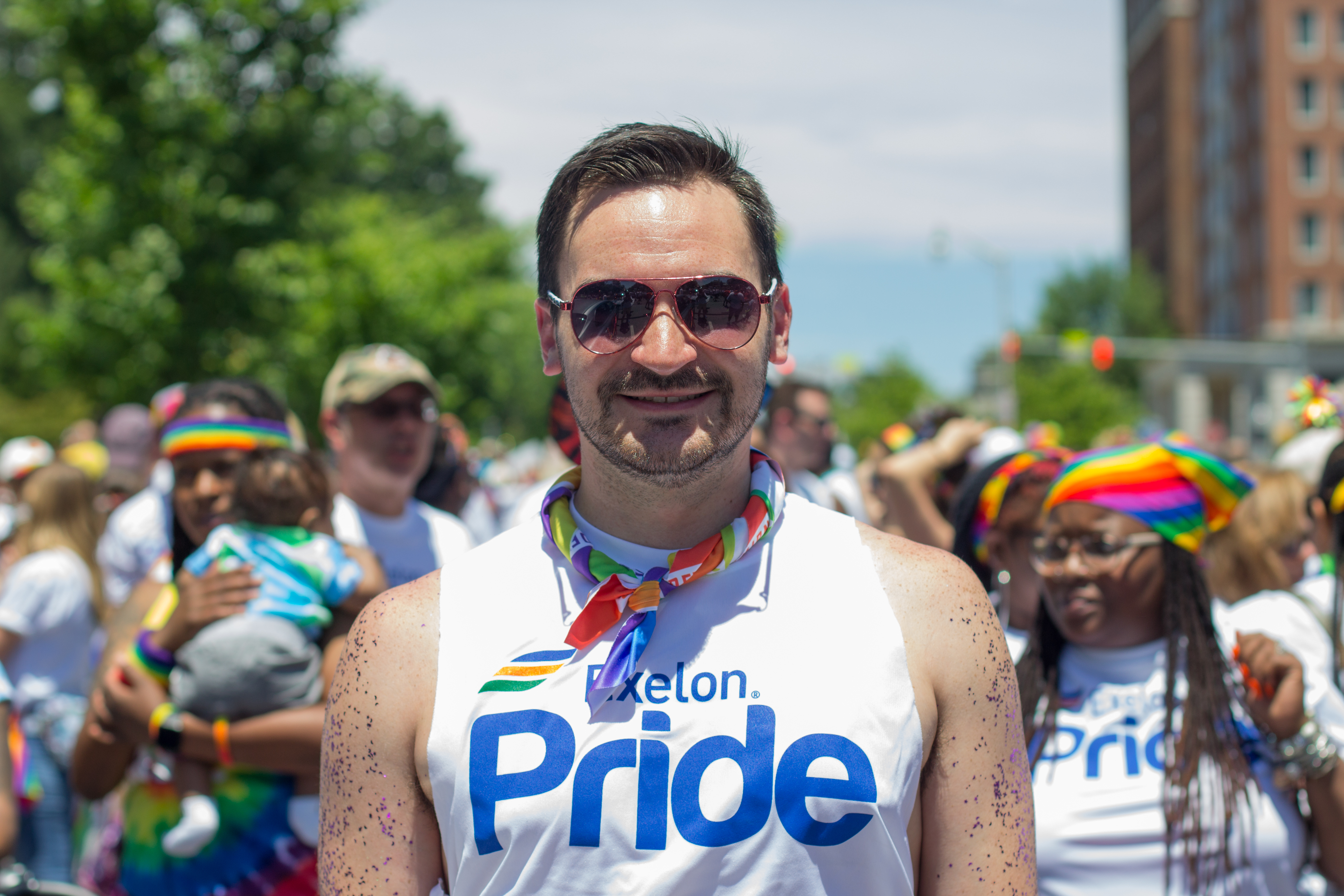 Chandler Watts is in year two of the Exelon Leadership Development Program, on the portfolio management track. He’s currently assigned to Constellation after spending his first year at PECO.

“I found my voice through Exelon Pride,” said Chandler. “I want to contribute to the group that contributed to me, that allowed me to find my personal and professional voice.”

As a member of the parade event steering committee for Exelon Pride Baltimore, he was thrilled by the impressive turnout of company employees. 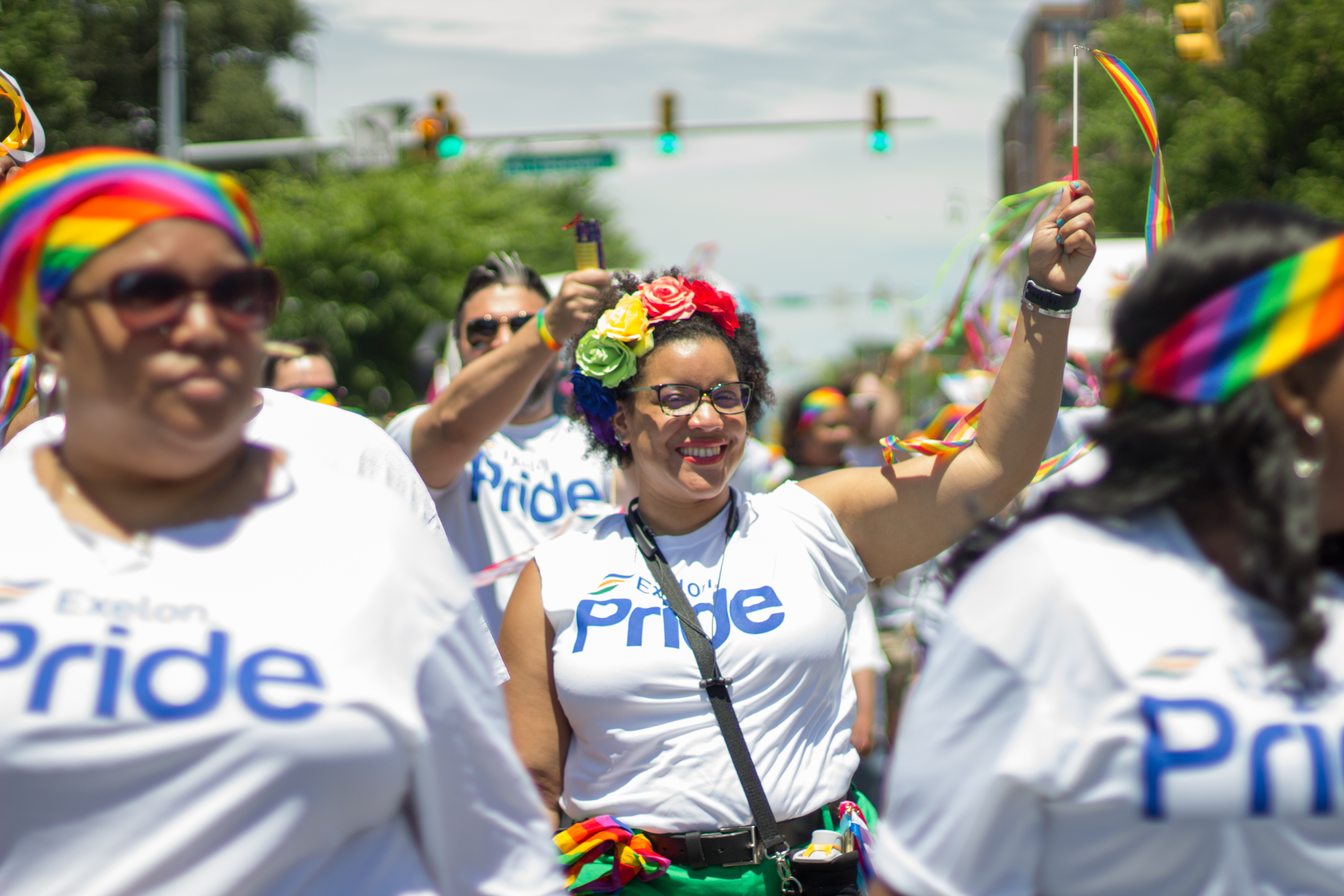 Samantha Oquist marched to support friends and family. She’s is a reporting analyst for Mass Markets at Constellation, where she has worked for 11 years. 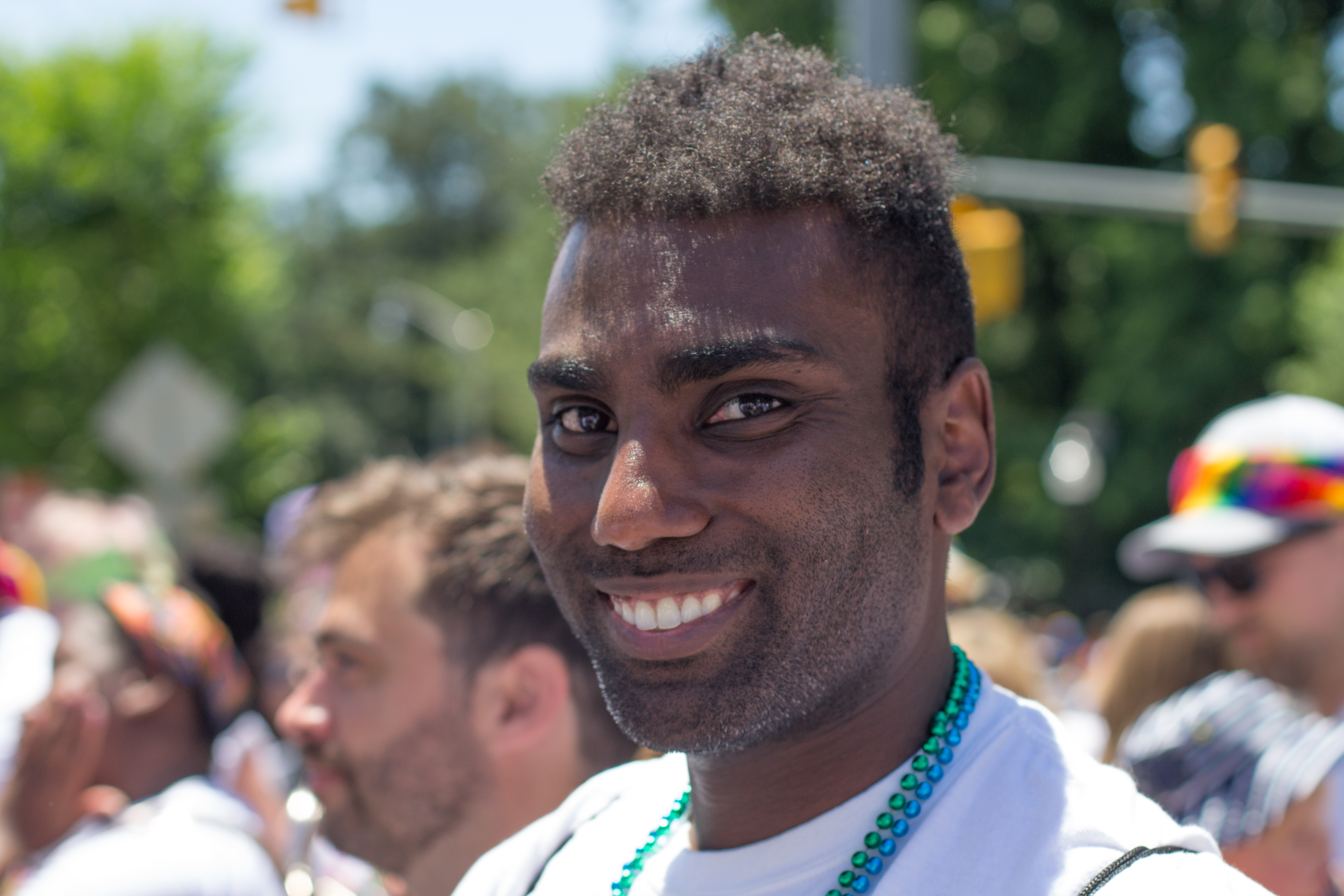 Brian Wright is an operations shift supervisor at Peach Bottom Atomic Power Station, part of Exelon Generation. He’s worked there for more than eight years. He commutes from his home in Baltimore to the plant in Delta, Pa.

He said, “I want to be a visible part of this community. It’s part of how I bring my whole self to work.” 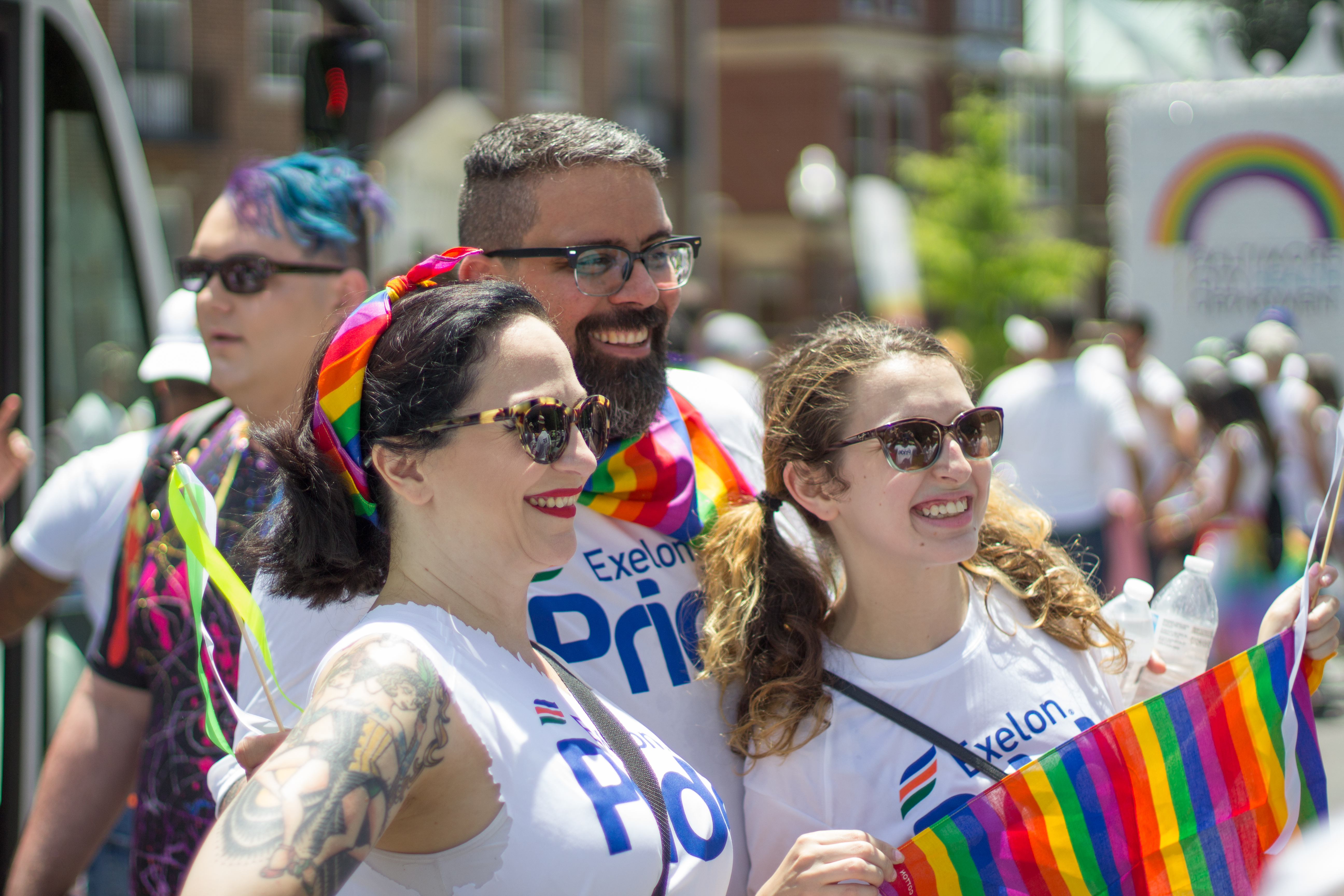 Lori Travis is a senior business analyst in BGE’s Customer Care Center. She became a pride ally when she was a teenager.

“I’ve been an ally for nearly three decades, beginning when a friend was marginalized for coming out in high school,” she said. “We must make sure those like my friend have a voice, and we must create safe spaces for them to have a voice.”

Lori’s husband, Aaron, and 24-year-old daughter, Elizabeth, marched with her. They’ve celebrated pride as a family for many years.

Lori and Aaron are both new to the company. Lori joined 18 months ago, Aaron is in month three.

“Everyone knows they are included at BGE,” said Lori. 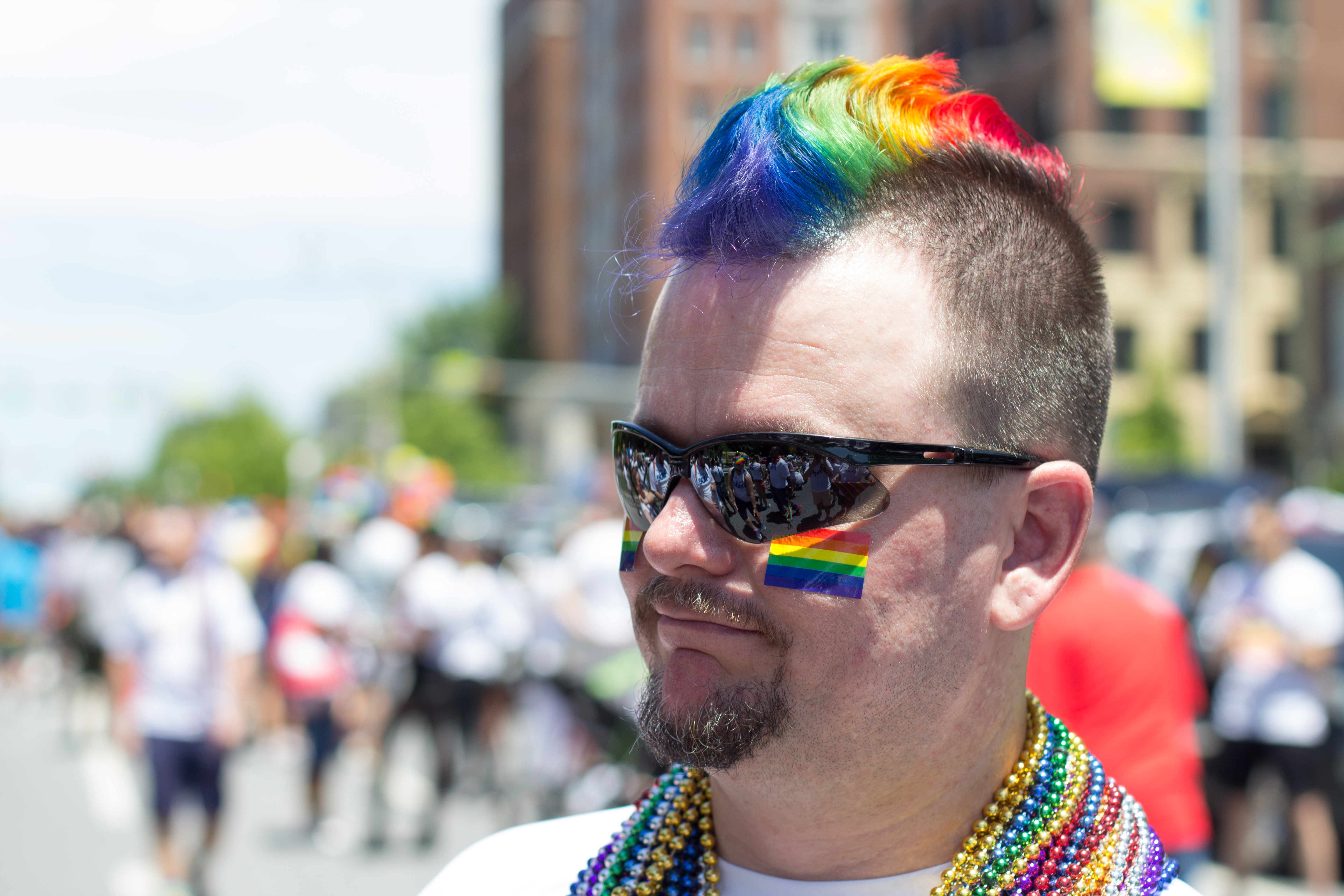 Longtime BGE employee Joe Grant is a principal arranger in Outage Scheduling. This year was his fourth Baltimore Pride parade.

He said, “I’ve seen a huge positive change as a result of Exelon’s big push for diversity,” he said. “Our inclusive workforce brings a lot of strength to the table.” 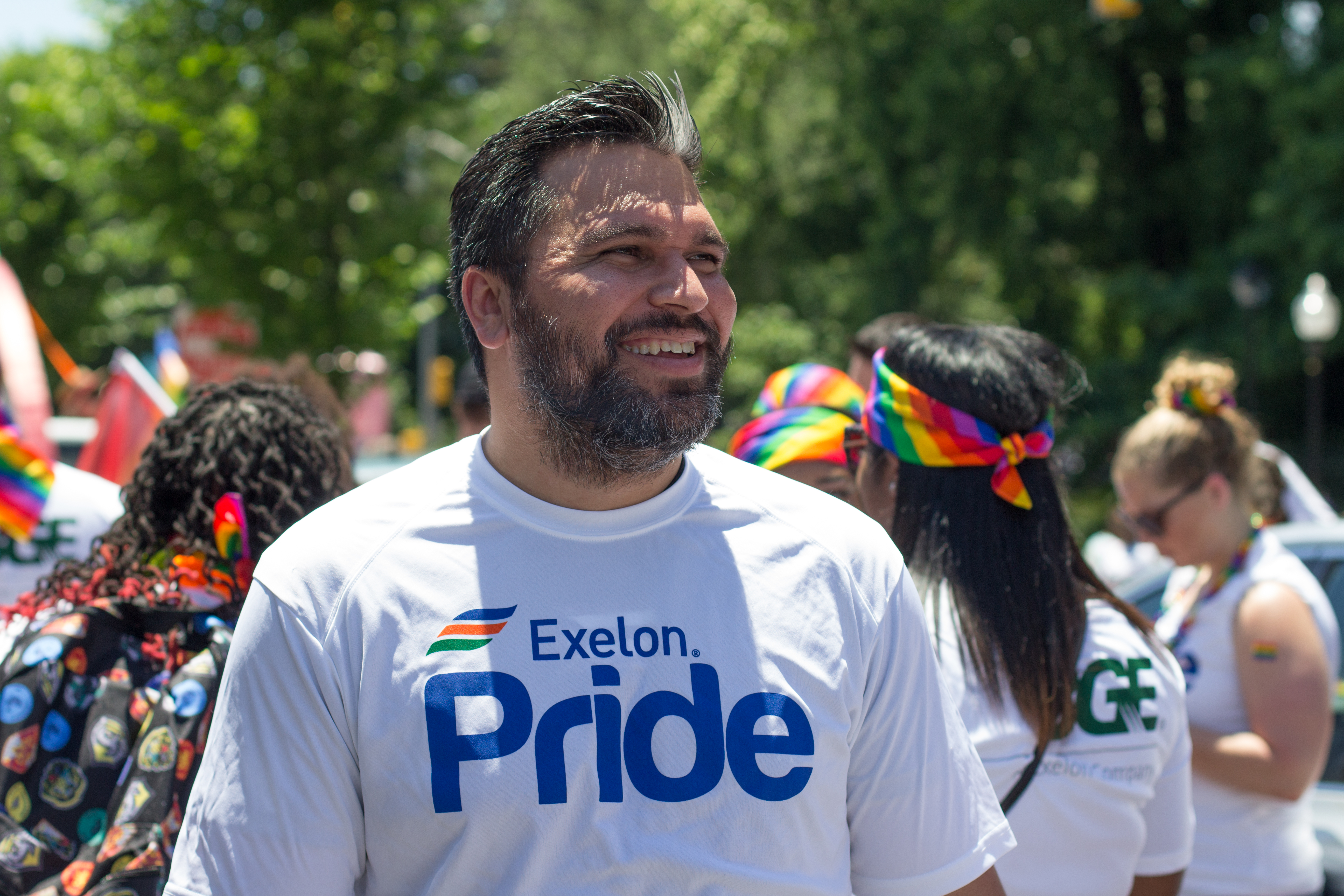 Andrés Salgado is a senior engineer in protection and control at BGE. He was hired in April and is originally from Puerto Rico.

Exelon is regularly lauded for its efforts to hire, retain, and promote employees from a variety of backgrounds and to create an inclusive culture. Earlier this year DiversityInc ranked Exelon No. 24 on its list of the Top 50 companies for diversity, up eight spots from 2018. DiversityInc also named Exelon one of the “Top 10 Companies for Diverse Leadership” (number 4), as well as a “Top Company for Veterans.” Exelon is the top-rated electric company on the Top 50 list. In addition, Forbes this year named Exelon to its second annual list of the Best Employers for Diversity in a national survey made up of rankings based on feedback from a company’s own employees. Military Times Magazine named Exelon one of the nation’s “Best for Vets.”

The Human Rights Campaign (HRC) has named Exelon a “Best Place to Work for LGBTQ Equality” four years in a row. HRC evaluates hundreds of U.S. companies for non-discrimination policies across business entities, equitable benefits for LGBTQ workers and their families, and support for an inclusive culture and corporate social responsibility. Exelon satisfied all of the criteria and scored a 100 percent ranking on HRC’s 2019 Corporate Equity Index.

More information about Exelon’s commitment to diversity and inclusion is available at exelon.com.