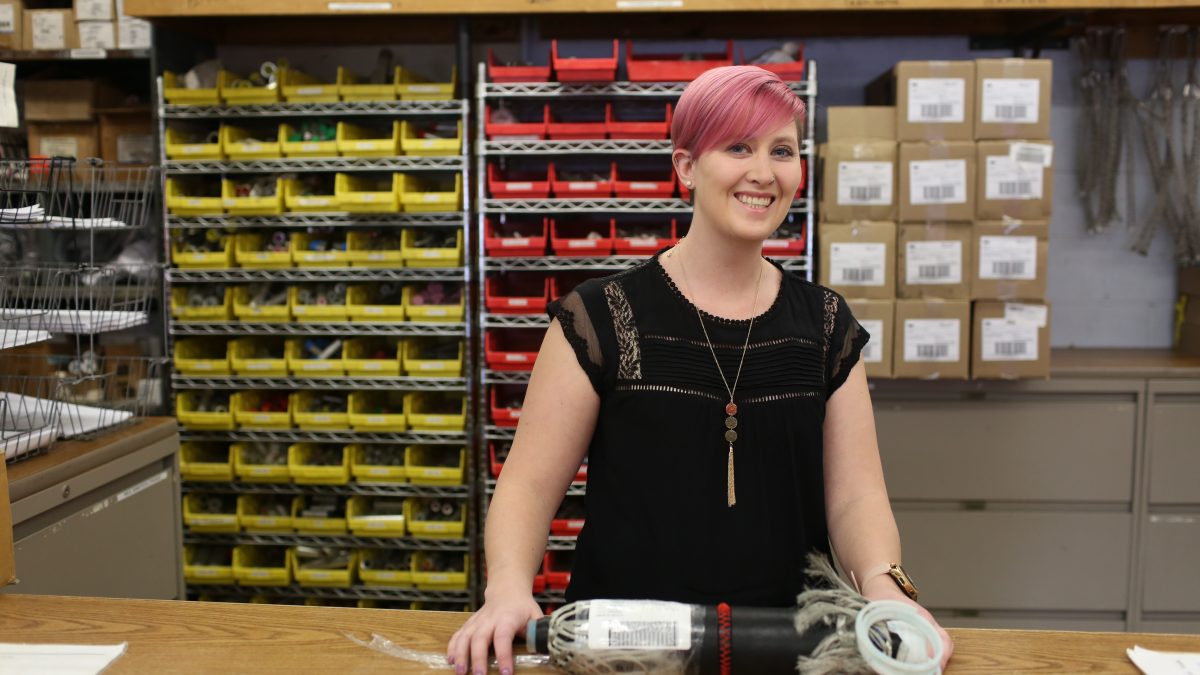 To women considering non-traditional work at BGE, she says, “Don’t sell yourself short. You’re always stronger and more intelligent than you think you are.”

When Kat Mckitish was in junior high, a classroom project required her to build a model bridge. The equipment? Manila folders, tape and scissors.

Her teammates – all boys – were in Kat’s words, “Immediately gung-ho. They were ready to start building.” Kat knew that plunging ahead using cardboard squares, as they intended, wasn’t the best approach. She said, “Wait, let’s step back. What is the strongest shape we can make as building blocks?”

Her argument won the day. They analyzed the problem and decided to build the structure out of carboard triangles. Their little bridge was so strong they could stack textbooks on it. It didn’t break until somebody stood on it.

From that day on, Kat knew she wanted to be an engineer.

Even before that event, Kat was inclined toward designing useful things. Her dad, a mechanical engineer, had introduced Kat to female engineers, so she never held the belief that engineering was a man’s field.

During her senior year at Penn State, Kat visited Baltimore to interview with BGE. She started work two and a half weeks after graduating with an engineering degree.

Her first job at the company was designing transmission facilities – the large structures and wires that carry electricity long distances.  When she moved into a job involving underground transmission lines, “I decided I really liked the underground world,” Kat said.

At this point in her career, Kat made an unusual request. She asked to be assigned to a field position, working alongside the crews responsible for installing BGEs underground power lines.

Normally, engineers work in offices and design structures for crews – who they may never meet – to install. Given BGE’s years of experience, survey and mapping capability, and excellent communication with the field, this system works well.

But Kat wanted to know more about the day-to-day installation process. She wanted to learn the perspective of the crews and see first-hand what barriers they encounter. Primarily, she wanted to know how, once back in the office, she could apply her engineering skills to make the work easier, safer, and more efficient.

So, “After some persuading and badgering and trying to show how I could add value to the process,” she received a temporary assignment working with the crews.

To have access to the field work and to be able to use the equipment, Kat had to qualify for certain tasks. In the utility world, that means demonstrating she understood safety protocols and standards as well as knowing how the equipment works.

“I was able to work day-to-day with the crews and truly gain an understanding of what they were up against,” she said. She wanted to observe how the crews received and understood the information her colleagues provided for the installation work. “But I also wanted to see what the physical challenges were like.” For example, how are they able to work in heat or during storms? What are the physical constraints like traffic or soil conditions?

As a senior engineer in Electric Distribution Engineering and Standards—the department where she has worked for the last six years—Kat collaborates regularly with a team of 90 crew members who install the company’s underground distribution equipment. (The distribution system moves power from local substations into neighborhoods and to customers.) She makes sure that materials and equipment provided to field crews meet required standards as well as the needs of the front-line workers. She also does a lot of problem-solving.

“I am willing to put in long hours, nights and weekends, because I know what I’m doing can keep our field crews safe. My specifications and designs can make the difference between life and death,” for the people installing the power infrastructure.

Kat spends a lot of time on the job site, getting a thorough understanding of any situation and talking to the people actually doing the work. One of Kat’s main challenges has been building trust – not because she is one of the rare females in the field, but because she is an engineer.

Most often, she said, the crews meet engineers only when something has gone wrong. And often, from the crew’s perspective, the engineer assumes it is the crew’s fault and is there to set them straight. “It’s taken a while for them to learn that I am there to learn and not find fault. Breaking through was a big step – and they have accepted me and my role with open arms.”

Now, she’s part of the family. “I didn’t grow up with any brothers, but now I have a whole team of them. Like brothers, they can push your buttons and get under your skin – and they’re the best group of guys I could ever imagine working with!”

She also has developed a profound respect for their abilities. “Working underground is a specialty. Different cables require different types of splices. It’s more than a skill – it’s a craft that takes dedication and patience to learn and to do well.”

To women considering non-traditional work at BGE, whether in engineering or out in the field, Kat said they should go for it. “Don’t sell yourself short. You’re always stronger and more intelligent than you think you are.”

She observed that generally women tend to focus on their flaws rather than their strengths. That often can be the biggest obstacle.

BGE employs many female engineers; two others—Courtney Dunham in Transmission and Ashley Giegel in Substation—work in the field in a similar capacity as Kat. “They pushed and strived to get where they are. We’re a group of ladies who won’t let anybody get in our way.”

Outside of work, Kat pursues an eclectic set of activities. She adopts animals that nobody else wants. Right now, her household includes her dog, Bongo, plus two one-eyed cats, Catty Boh and Old Bay.

Her friends say she has the hobbies of a 90-year-old: knitting and quilting. But she also plays kickball and football and is a trivia buff.

And to feed her passion for helping, she is involved with the Make-a-Wish Foundation. She helps the children choose their wishes, and in response to their requests, “I get to plan all the fun stuff!”

Kat said the family feeling she experiences at work extends throughout BGE, not just within her newfound field brotherhood. The person she calls her ‘Baltimore Mom’ is Lynn Gallegos, a senior engineering tech specialist in Asset Management and Reliability. Kat says Lynn “took me under her wing from the day I joined the company. She has helped me develop both as an engineer and as a woman.

“And I am surrounded by a really great group of co-workers. There are no selfish employees here, they all want to share their knowledge.

Kat said, “I don’t know if I’d be as good an engineer if I worked anywhere else.”