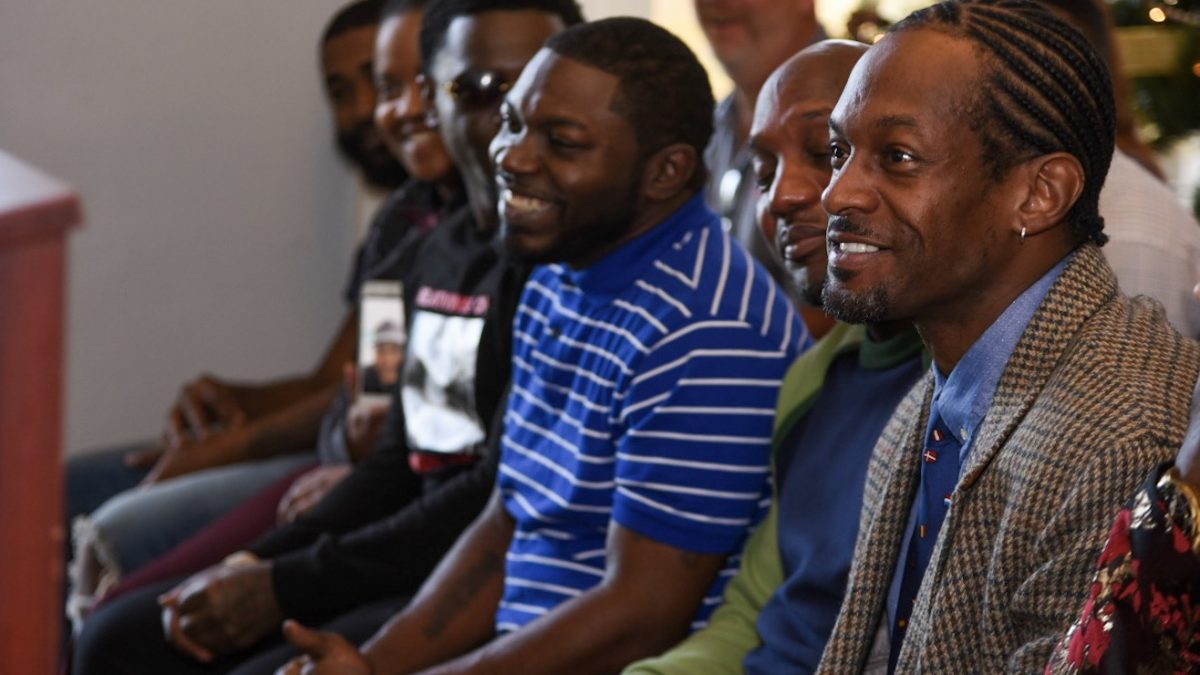 At age 42, Rickey McCarter was going through a rough patch. Despite a long work history, the New York native now living in Baltimore was underemployed, homeless, struggling with emotional issues and trying to make child-support payments.

When a friend referred him to Civic Works, Rickey (far right in the above image) jumped at the chance to learn about the nonprofit’s training opportunities. Among the different options, Rickey said, he was immediately drawn to BGE’s Workforce Collaborative which focuses on utility infrastructure work.

“My dad was a master mechanic, and I grew up hands-on savvy, working on cars and houses.” He had also worked construction jobs in New York.

“When they offered me the chance to get back into that field and get some of the certifications I used to qualify for, I was super excited,” Rickey said.

From his introductory meeting with Civic Works staffer Chris Dews, Rickey knew he wanted in. “Chris laid out everything in the program and showed me how it could help me change my life. He sold me on the program.”

Dews emphasized the kind of commitment it would take to succeed, and Rickey knew he had the necessary level of commitment. When asked questions like, “Are you prepared to show up on time every day? Do you understand that you need to treat the classroom like a real job?” Rickey gave an unqualified “Yes!”

And Rickey was determined to show them what commitment looked like. “I would get there early and sit in the parking lot every day to make sure I was on time.”

Looking back, Rickey remembers the excellent hands-on training he received and the skills he learned. But the other parts of his life were more challenging to him than acquiring new skills. He is effusive about the additional support he got from Civic Works.

“Sarah Kennedy (a Civic Works staffer) is like a sister. She is a great listener. She helped me with the turmoil I was dealing with – like helping me get in to see a therapist, anything I needed to do to strengthen me mentally and keep my feet in the right direction.”

He’s also grateful for physical sustenance. “I never had to worry about food. Civic Works kept a pantry full so I could prepare breakfast or lunch.”

In addition to the Civic Works staff, Rickey credits his family – 200 miles away in New York – for his success. “My parents, my sister, my brother – they all motivated me to put my best foot forward and complete whatever tasks I set out to accomplish.

“My parents are both disabled, yet they are always available and in my corner.” Other family members called regularly during his training to offer encouragement and support.

Putting his training to work

Shortly after completing the eight-week Workforce Collaborative program, Rickey received a job offer from Stella May. This established firm provides construction services to public and private utilities throughout the mid-Atlantic region and does extensive work on BGE’s gas system.

His training positioned him well for the job – and his determination and willingness to learn has impressed everyone he works with. He enjoys learning, and he enjoys working hard.

“I love all the hands-on things I’m doing. And they’re building my comfort level with the work. They’re constantly quizzing me and drilling me. They take an interest in their employees as individuals,” which means a lot to Rickey. “I get a lot of great feedback from my superintendent and foreman.”

“I’m building a small library of go-to materials for when it’s time to prepare for a new qualification,” Rickey said. (Qualifications are granted when construction employees demonstrate they know how to perform certain tasks according to codes and safety regulations.)

Rickey said he spends a lot of his spare time getting ready to display new skills. “I’m like a sponge. I’m just trying to absorb as much as I can to push myself to the next level,” he said.

Rickey already has 20 operations qualifications, and his employers are encouraging him to finish more training that will make him eligible to become a foreman.

A standout in so many ways

Civic Works’ Sarah Kennedy said of Rickey, “He’s a real leader in addition to being a hard worker. It’s exciting to see where he’s going.” During his training, she said, Rickey stood out as an advocate for himself and for his fellow trainees.

Eli Allen, who directs Civic Works’ training programs, said, “Rickey was in the first utility infrastructure training cohort. He has given us a lot of feedback, and as a result we’ve made a lot of changes. For example, we have added more intense utility training, more hands-on experience with trenching and related work. Rickey’s the one who gave us those ideas.”

Eli said Rickey has had a big effect on the future success of Civic Works’ training programs. “We now have an incredibly positive track record. The work Rickey does is a big reason companies like Stella May will come back to hire from future classes.”

And in the months Rickey’s been with Stella May, his work ethic has made an impression – all the way to the top.

“Rickey epitomizes our corporate mission: To safely serve and to shine!,” said Harley Flack, president and CEO of Stella May. “Rickey has excelled at Stella May, working with others constructively to ensure that he and his team members are safe on the job and leave at the end of the day as healthy as when they arrived.

“The very nature of the work we perform with BGE requires collaboration and teamwork. Rickey McCarter continues to help Stella May and the BGE team bridge communications and strengthen the links between our companies.”

A positive outlook and a drive to succeed keep him going

Rickey is enthusiastic about the skills he’s gaining, he’s grateful for the opportunities he’s had, and he is confident about his future.

Rickey’s still facing some challenges. He’s working hard to meet commitments to his children while saving for a place to call home. Since COVID-19 hit, he has spent many nights sleeping in his truck.

Yet, he’s resilient and optimistic. “I feel really good about everything I’ve done for myself since I started the program. I have a plethora of skills. Even if I weren’t working in utility construction, I could find work on any of the construction sites in the area.

“There is so much growth potential. Now I’m looking forward to what hurdle I can leap next.”

New program at Mervo is next chapter in workforce development; “I didn’t grow up in a neighborhood that has a lot of opportunities and that’s why my internship at BGE meant so much to me”