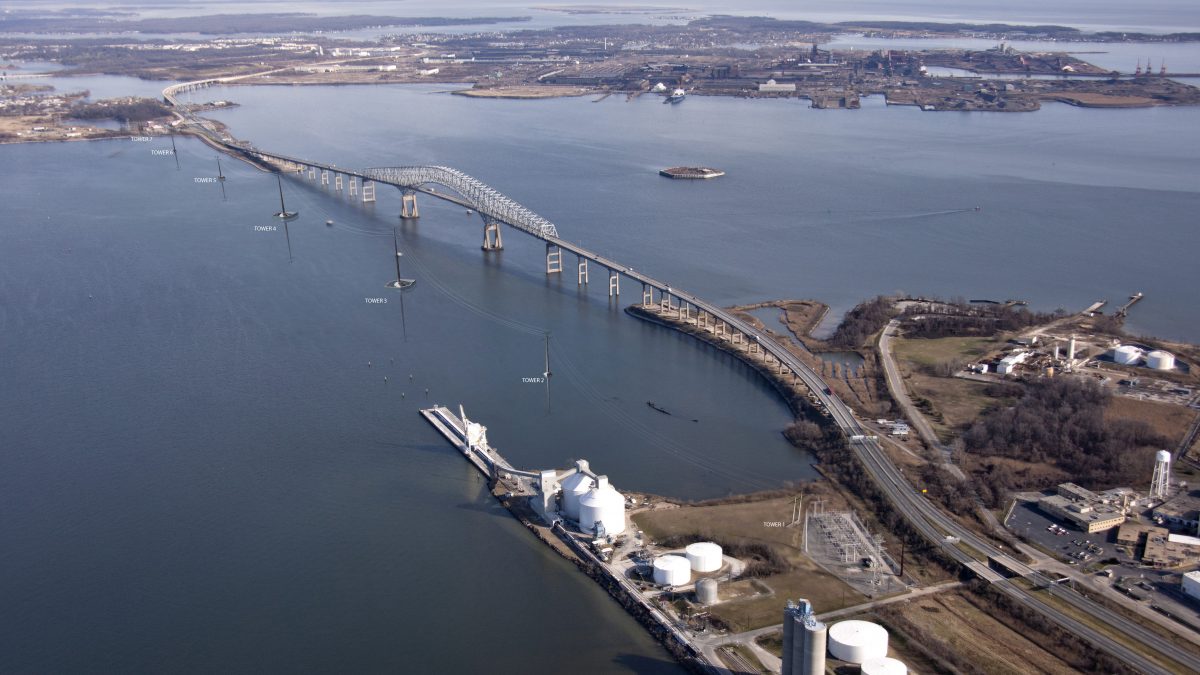 BGE continuously monitors its equipment in order to continue safe and reliable service for our customers. As infrastructure ages, we repair or replace impacted equipment… even when it runs under a major waterway.

BGE operates nearly 1,300 miles of transmission circuits in central Maryland. These high-power lines are often seen on tall towers and connect power plants to the local energy grid. But these lines can also go underground and underwater where an overhead line isn’t feasible.

One underwater segment of BGE’s transmission system is nearing the end of its useful life span and must be replaced – where this gets tricky is its location… under the Patapsco River next to the Francis Scott Key Bridge.

Initial studies on replacing this “Key Crossing” segment, which was installed in the 1970s, reviewed placing a new underwater line, but findings revealed there would be significant environmental impact to the Chesapeake Bay and its wildlife and construction would have a negative economic impact on the Port of Baltimore. The BGE team switched gears and studied an overhead transmission replacement to see if it made more sense.

It did, and after discussions with regulatory agencies, BGE decided to go with overhead lines for several reasons:

BGE has been working with key stakeholders since the project’s inception. Extensive outreach and more than 50 meetings engaged stakeholders from environmental, business, historic preservation, neighborhood and other groups to ensure that their questions were answered and feedback incorporated into the final design wherever possible.

Construction is targeted to begin in 2020, pending regulatory approval, and will take approximately 24 months, with the go-live date scheduled for December 2022. Prior to work beginning, BGE must obtain regulatory permits including a Certificate of Public Convenience and Necessity (CPCN) from the Maryland Public Service Commission. Any individual can provide public comment at one of three evening hearings:

BGE continuously invests in its infrastructure to ensure that all customers benefit from the safe and reliable delivery of electricity and natural gas to all customers. Since 2014, BGE has invested more than $5 billion in system upgrades and expansions that include natural gas pipelines, utility poles, overhead power lines, underground cable systems, and other equipment.

In Anne Arundel County, Muddy Creek is a sleepy stream that empties into the Rhode River. But when heavy rains hit, a span of the Creek that crosses a BGE transmission right-of-way (ROW) turns into a high-speed sediment delivery service headed straight for the Chesapeake Bay.

Powering the Preakness: How BGE ensures electric reliability for Pimlico

Frontlines: How BGE’s “Fix it Now” Crew uses “Sharks” Take a Bite Out of Power Outages

Nothing strikes fear in the heart quite like a glimpse of a steely gray shark fin.  But to BGE’s customers, fins can be a welcome sight.