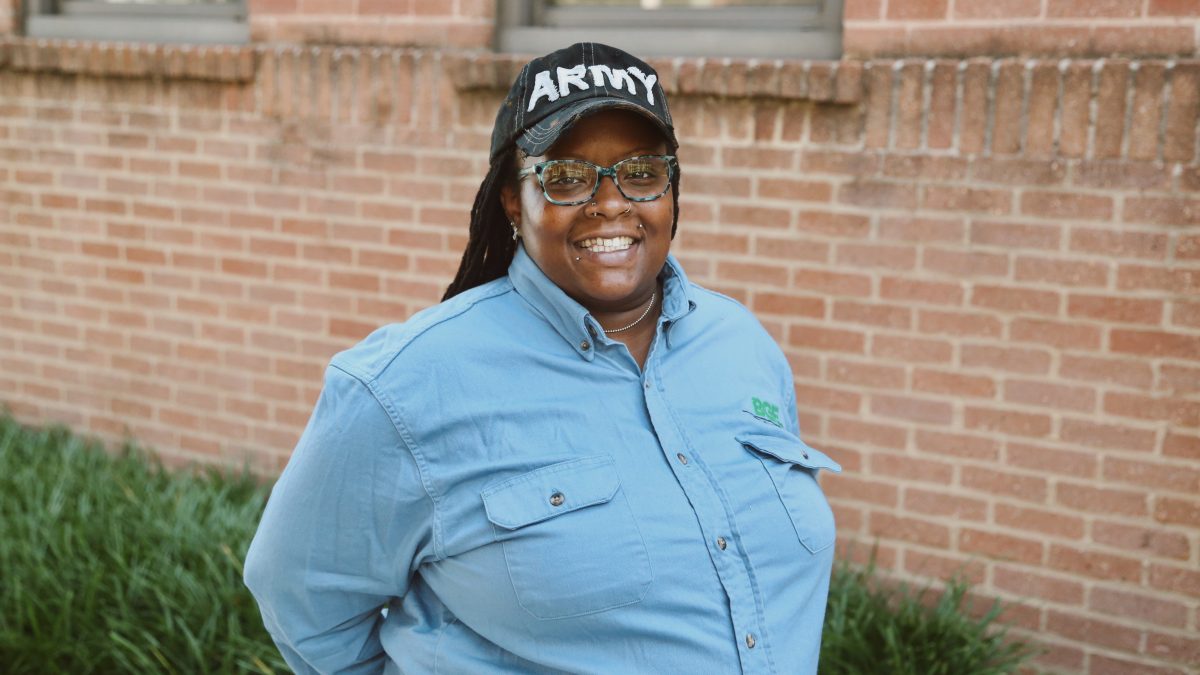 Meet the first woman in BGE history to serve as gas controller, the latest chapter of her career that has focused on country, customers, and community

Shameka Wilson will tell you she joined the military because she wasn’t sure what she wanted to do with her life after high school. In retrospect, it’s clear that even as a young girl, Shameka was eager to assume responsibility for whatever cause she encountered.

In the short term, she helped shoulder the burden of national security — including a year spent supporting U.S. troops in Iraq as an equipment operator.

Years later, in March 2019, she became BGE’s first woman gas controller. She and her co-workers are responsible for ensuring safe, reliable natural gas service to more than 680,000 BGE customers.

After four years in the U.S. Army, Shameka returned to her home city of Baltimore in 2004. Two years later, she joined BGE, where she provided office support to technicians working on electric meters.

In a natural gas utility, Gas Control is the brains behind the company’s gas service central nervous system. Staffed 24/7, the department keeps watch over the utility’s gas delivery system.

Shameka and her colleagues monitor and adjust to ensure every inch of the natural gas system has the correct amount of pressure. Their watchful eyes on sophisticated electronic equipment detect any points where pipeline pressure is too low or too high. From a centralized control center, they make instant corrections to keep the system safe and reliable.

In short, they make sure the gas is flowing to customers, so it’s available to their homes and businesses.

It’s a demanding job, requiring constant attention during 12-hour shifts. But Shameka thrives on knowing that the company and its customers are relying on her.

“I like that responsibility, the responsibility of taking care of our customers. Every work day, I take actions that guarantee that our customers are staying warm and can take hot showers and can tuck their children safely into bed at night,” she said.

Shameka encourages other women to explore the wide range of positions at BGE. “I believe that women are capable of doing any job in this company. You’ll be surprised at what you’re capable of. We shouldn’t put any limits on ourselves.”

Before Shameka applied for her current position, she spent time shadowing the controllers to learn more about the job, the skills required, and how they spent their time.

She recommends that approach to other women looking for positions in non-traditional roles. “Look into the job to make sure it’s something you’d like to do. Even if you don’t have every skill required, don’t worry. The company does a great job of training.”

During her years in dispatch, Shameka developed a comprehensive understanding of the company’s operations and systems. That knowledge serves her well in Gas Control, which is interdependent on many other departments and their employees.

She recommends that others interested in Gas Control try to learn as much as they can, not only about the role of a gas controller, but what other groups rely on Gas Control for information, direction, and quick response.

One message to women looking to advance: “Don’t be intimidated by a new work possibility — even in an all-male setting. My military background definitely helped me in that respect,” she said.

Despite the 12-hour days, Shameka is out in the community in her spare time, sharing her knowledge — and her big heart — with others.

She frequently reaches out to Baltimore youth, advising them on career goals and other tips for success. She loves addressing high school groups and career fairs (“I got an ‘A’ in public speaking in school!”). And for three years she has mentored a little girl, now 10 years old, through the Big Brothers/Big Sisters program.

Saturdays find her volunteering with homeless programs — helping with free clinics and supporting other basic needs. And four times a year she organizes a dinner at a shelter for homeless veterans — a great passion of hers.

“The veterans really appreciate me just being there, sitting with them and talking. A lot of them have lost their families since returning home,” she said, and these visits seem to ease some of the pain and loneliness.

Financial contributions are critical, she said, “but time volunteered is priceless.”

And soon, Shameka will have more competition for her time. In addition to two dogs and a kitten, Shameka and her fiancé are expecting their first child.

One more responsibility. One more expression of love.

To women considering non-traditional work at BGE, she says, “Don’t sell yourself short. You’re always stronger and more intelligent than you think you are.”

She heard the voice of her childhood mentor rising above the constant hum of warnings that “engineering is a man’s career.”