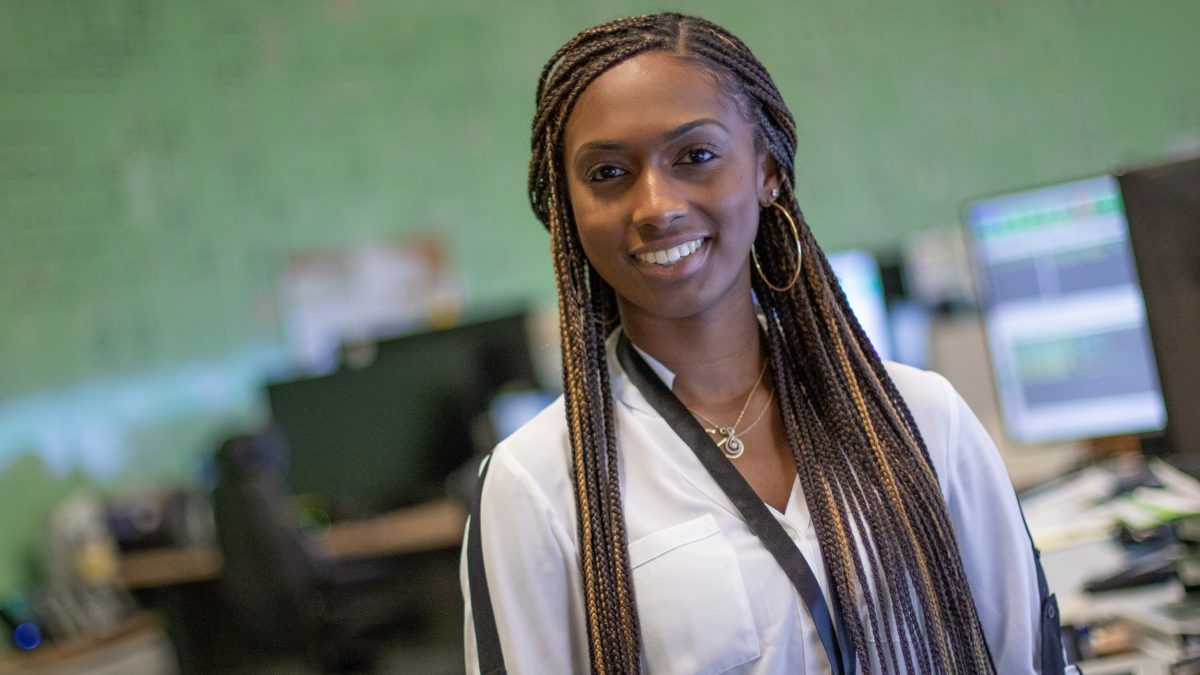 She heard the voice of her childhood mentor rising above the constant hum of warnings that “engineering is a man’s career.”

Saché Martin wants women thinking about non-traditional jobs to know they “might be pleasantly surprised” at their success and the reception they get.

Other than someone looking at her in the early days of her job and saying, “You don’t look like an operator,” and occasionally having to explain on the phone that she really is an operator and not an administrative assistant, she has been well-received as the first woman in her role at BGE.

A year ago, Saché became BGE’s first female distribution systems operator. She works “hand-in-hand with the field crews” to make sure they are safe and have adequate information when they are working on power lines and infrastructure.

From their centralized office, operators control how power moves throughout the BGE electric distribution system. Managing this ‘configuration’ requires constant monitoring of automated equipment and collaborative service restoration planning to minimize service impact on customers and maximize safety at the scene of a hazard (like downed wires). They work closely with field crews to identify problems and plan equipment installations and replacements, including making sure the power is turned off when necessary so crews can work safely.

Operators are either engineers or employees with extensive experience working on distribution systems in the field.

Since she was a little girl, Saché had an idea that she would become an engineer. Her mother’s best friend was an engineer – who, coincidentally, has long worked for BGE. “I was very close to her growing up. She was my mentor from the time I was a toddler, and she encouraged me to pursue engineering,” Saché said.

Saché always loved math and science, and she was inspired by her mentor to get a degree in industrial engineering at Morgan State University. The historically black university excels at preparing students to break racial and gender barriers.

“Engineering has traditionally been dominated by white males,” she said. The university prepared engineering students to be comfortable entering what could be a new, possibly intimidating, culture. By the end of her Morgan State education, Saché said, “I felt prepared and ready to do whatever these guys are doing.”

Just under a year after joining BGE, Saché took a vacation in Atlanta. A friend asked if she was homesick, and her reply was, “Not really homesick, but I do miss my job!”

“I really enjoy the problem solving, which is one of my strengths,” she said, “But what I really like about my work is the culture. Everybody makes you feel comfortable from day one. It’s really like family.

“They all are watching out for each other. If you’re too busy, they’ll step in to help out,” she said.

“I have conversations with other people where I say, ‘I love my job.’ And they reply ‘What? How does that happen?'”

Saché’s intense work still leaves her time to do other things she loves. A self-proclaimed fitness enthusiast, she lifts heavy weights. And she travels whenever she can – from the Caribbean to France to Japan. She’s currently enrolled in the MBA program offered by the University of Maryland Global Campus.

Saché is equally as enthusiastic about encouraging other women to pursue utility careers.

When she was training in engineering, people told her, “You know, it’s only a man’s field.” But, she said, “I knew it would be okay. I had confidence in myself.”

“Women sometimes succumb to society’s projections – the assumptions that men are smarter, men are stronger,” she said. “Too often we talk ourselves out of opportunities. I would encourage women to strengthen their strengths and work on their weaknesses.”

Then go for it, Saché said. Chances are, “you will be pleasantly surprised.”