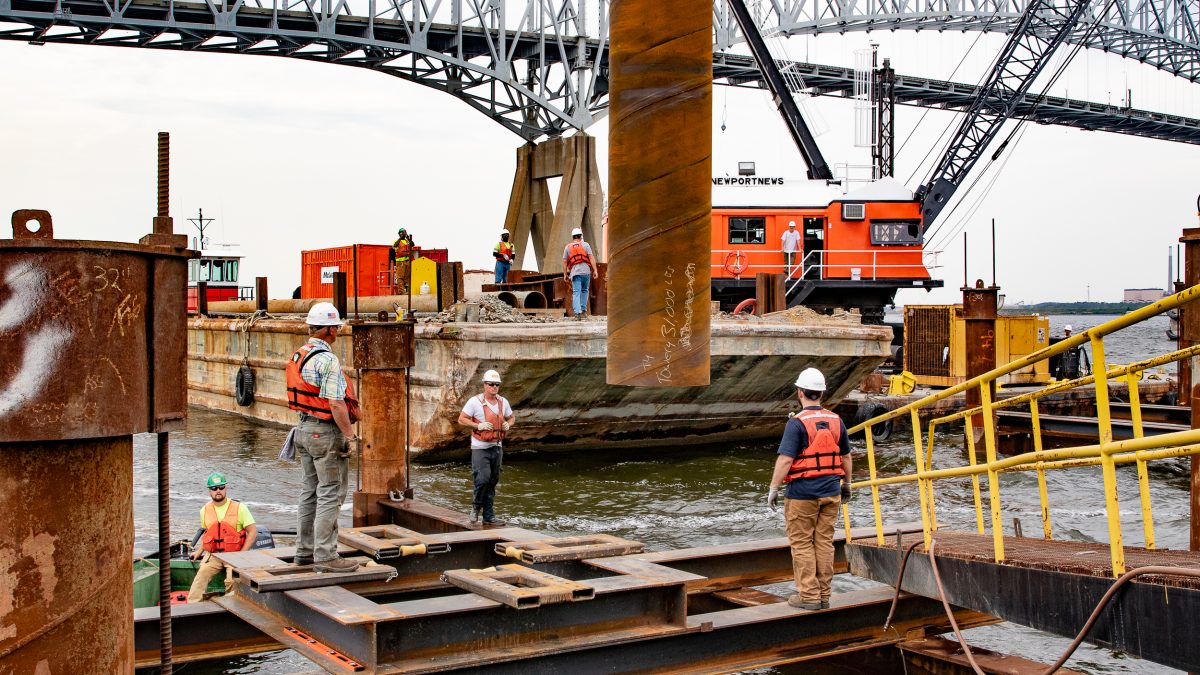 Update: the completed Key Crossing Reliability Initiative was named a “Best Transportation Special Solution” by the Precast/Prestressed Concrete Institute for the 2023 PCI Design Awards, a program that recognizes design excellence and construction quality using precast concrete. The program has helped the design and construction community innovate and advance by showcasing ideas that push the envelope, overcome challenges, and improve upon existing concepts. Award winners are chosen for their use of high performance precast/prestressed concrete to achieve sustainable, more cost-effective, aesthetically-pleasing, and quickly constructed projects.

Most large construction projects break ground with a ceremonial shovel jabbed into loose soil. To kick off the Key Crossing Reliability Initiative, BGE drove a steel pile into 100 feet of soft mud beneath the Patapsco River.

It’s a fitting start to construction of such a significant infrastructure project.

Underwater transmission cables in this shipping thoroughfare to the Port of Baltimore are nearing the end of their useful life. Multiple studies on replacing this “Key Crossing” segment, which was installed in the 1970s, determined that running new power lines high above the water would have a fraction of the environmental impact on the Patapsco River and its wildlife and be far less disruptive to port operations. Plus, overhead replacement would be half the cost of the underwater alternative, reducing the impact to electricity bills. It would also support more local jobs.

What followed was extensive planning, permitting, and outreach to key stakeholders—including environmental groups, elected officials, government agencies, and community leaders. The BGE project team received all necessary federal, state, and local permits prior to construction, and incorporated stakeholder feedback into the final design wherever possible.

Key Crossing construction began in early June 2020 and is expected to be completed in two years. Glen Burnie-based McLean Contracting is leading this initial stage from two massive crane barges. Their task: drive 120 steel piles deep into the Patapsco riverbed. The piles will be grouped into five clusters, which will each support a concrete foundation for one of the five new transmission towers for high-voltage wires strung across this two-mile wide river parallel with the Francis Scott Key Bridge.

Groundbreaking is here, with a 138-foot “test pile” for tower No. 4. During test pile installation, McLean crews, environmental consultants, engineers, and other specialists take readings from sensors to perform a raft of observations—among them, whether the pile can withstand more than 1.4 million pounds of vertical force, and measuring the construction noise and vibrations to ensure they remain safe for aquatic wildlife.

The pile driving process is a tour de force of heavy equipment handiwork.

McLean’s crew uses a 200-ton crane to hoist the pile from a horizontal to vertical position, then carefully lower it through placement guides on the surface of the water. The pile does much of the driving itself under its own weight.

Once the pile settles, McLean deploys a vibratory hammer to push the pile into the river bottom and then a diesel impact hammer to finish the driving job. The top of the pile will remain roughly 4 feet above the surface of the river, which is 23 feet deep at this location.

They also install a temporary bubble curtain to help protect fish in the area by reducing underwater noise caused by driving the pile. The bubble curtain is just one example of the environmental mitigation techniques that will be used on this project.

McLean will repeat some iteration of this process many times through the end of the year, when they anticipate they will have completed installation of every pile and can transition to vessel collision ring and foundation construction. McLean is also responsible for building foundations for Key Crossing’s three land-based towers—one on the Hawkins Point side of the river (Baltimore City) and two on the Sollers Point side (Baltimore County). The towers and wires stage of the project will begin in 2021.

Key Crossing is one small segment of nearly 1,300 miles of transmission circuits BGE operates in central Maryland. These lines are part of the regional transmission system that transports electricity into, out of, and through the BGE service area.

More information about the Key Crossing Reliability Initiative is available at bge.com.

BGE continuously monitors its equipment in order to continue safe and reliable service for our customers. As infrastructure ages, we repair or replace impacted equipment… even when it runs under a major waterway.

Frontlines: How BGE’s stopping gas leaks from the inside out