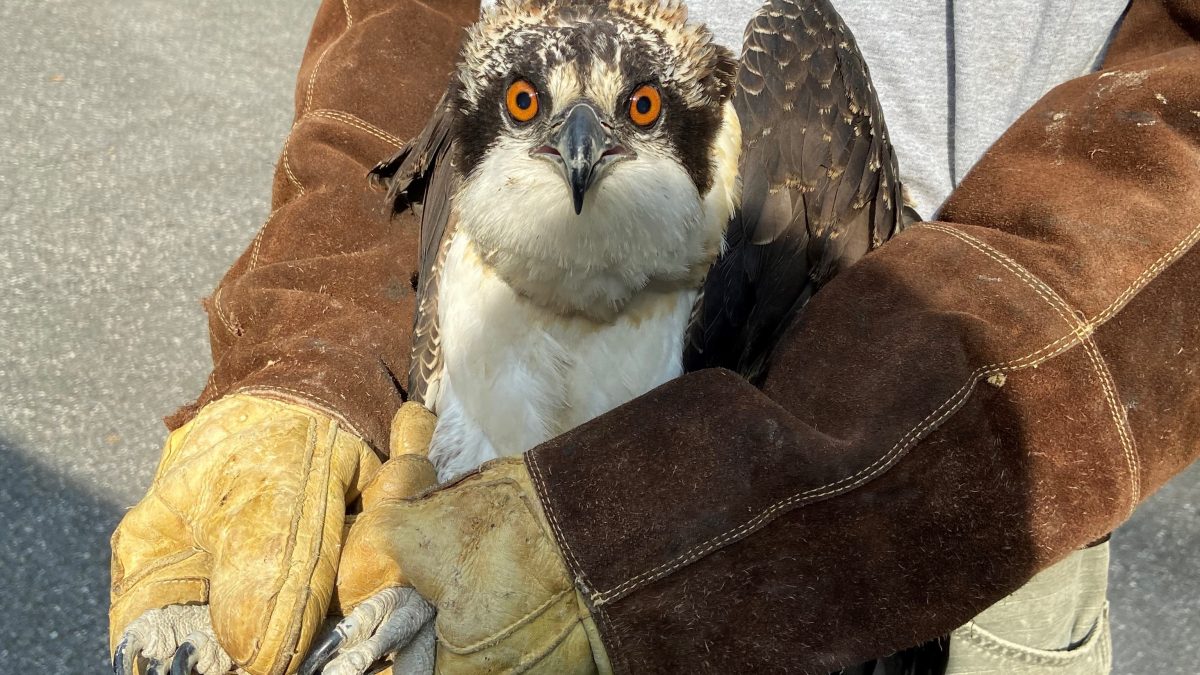 For decades, BGE has protected osprey families from fire and injury by relocating osprey nests away from power poles. This summer, osprey safety became personal for BGE employees who had the satisfaction of learning an injured chick they had rescued had fully recovered – and is ready to fly south.

Gregory Kappler, BGE’s Principle Environmental Project Manager, has a huge job. He makes sure the company is fully compliant with local, state and federal environmental regulations in all its operations, while constantly looking for effective ways to protect the environment.

And yet, Kappler is never too busy to rush off to rescue an injured bird. So, when he got the call that an osprey chick seemed to be injured at a BGE site, he grabbed two towels and rushed to the Spring Gardens equipment yard.  (Yes, towels are important in animal rescue!)

In 2008, BGE had built a stand-alone platform at Spring Gardens in hopes it would attract nesting ospreys. That platform was ignored for 13 years – until this spring, when two ospreys used it to build their nest.  It was from this nest that a young chick had a failed landing.

Kappler met his colleague, Senior Environmental Project Manager Kevin Hedge, at the site, and the two men tried to track down the chick.  As it turns out, Kappler said, “the bird was smarter than we were.  He was hiding under the protection of some plywood, while Kevin and I were out in the sun sweating.”

They urged the bird out in the open. Kevin said, “We wanted to see if he was injured, so Greg spread his arms wide apart, and the bird spread his wings.”

After grabbing the frightened bird, they threw a towel over his eyes, which calmed him down immediately. They were able to put him in a large, insulated box (though a baby, this osprey was already about three-feet tall) and assess his injuries.

They then called Kathy Wood of Phoenix Wildlife Rescue, a long-time partner with BGE, and described the bird’s condition over the phone. When Wood determined that the wing could be healed, Kappler and Hedge hopped in a truck and drove nearly an hour to the Phoenix facility.

Less than a month later, the young osprey is well and ready to go.  A veterinarian patched up the area of missing skin on the bird’s wing.

Wood said the chick was seven or eight weeks old when rescued. Had he been less mature, Wood’s organization would have tried “renesting” him – putting him in a nest with another osprey pair to nurture him until he was ready to venture out on his own. But this chick is now mature enough to be let loose. His migratory instincts will lead him to Central America and then back to the area near Chesapeake Bay where he was born.

Wood and her staff at Phoenix are always eager to help keep wildlife alive and to return them to the wild.  She lauds BGE for its quick response.

While Kappler has rescued dozens of raptors, the osprey incident was Hedge’s first experience capturing an injured animal. “It’s really something we need to get comfortable with.” He is grateful that Woods has offered to train BGE personnel in ways that are safe for both the people and the creatures. “The more time you practice, the more prepared you are for what comes: it’s the BGE way.”

He has already learned what to do in case of capturing a blue heron. “Control the beak. It’s like a dagger!”

Under a long-standing BGE policy, the company builds new poles and platforms on which to relocate osprey nests built on utility poles.  While these poles seem perfect for nesting – tall and protected from predators – they can jeopardize both the birds and the power lines.

To build a nest, Kappler said, the birds “use anything they can find: driftwood, string, and they will actually snap branches off trees and carry them to their nest.”  (He once found a child’s cap gun built into a nest.)

All that flammable material can fall onto power lines and start fires. So, moving the nests not only protects birds: It is important to prevent power disruptions to BGE customers. The company works with landowners to build a new platform. Cooperating owners agree to keep watch over the poles to ensure the nests stay safe.

More recently, BGE instituted Osprey Watch. Kappler said, “We have a huge service area, and we can’t be everywhere,” so the company has asked area residents to help them keep on eye out for nests that could be at risk.

The company asks people who see nests on top of poles to email ospreywatch@bge.com with details about the pole’s location. This notification starts the relocation process.

The innovative Osprey Watch program won BGE a $10,000 environmental award from parent company Exelon. BGE passed the funds on to Phoenix Wildlife Rescue, in acknowledgement of its ongoing work on behalf of the wild creatures of Maryland.

And Woods has glowing comments about BGE’s effort. “As more and more birds return to our area, there will be more chance of nests on unhealthy platforms.  It’s great that BGE is doing what it’s doing. The company has been forward thinking. They seem to really care about wildlife.”

In addition to rescuing injured animals, Phoenix will step in to help businesses or agencies that need to move nests that are in the way of construction projects. Had her organization been called, staff could have prevented the euthanizing of chicks in two such recent incidents.

Kappler hopes that people in the BGE service area will keep these two programs in mind: Osprey Watch, if you see a nest on a power pole; and Phoenix Wildlife Rescue, if you find an injured animal – or feel like supporting an excellent non-profit.

For Kappler and Hedge, the bird rescue was all in a day’s work. While they focus on the big picture, they value the opportunity to make a difference in the life of a single osprey chick.

Kappler said, “It’s not all that often you are asked to save a bird. It’s an honor to be able to do this on behalf of BGE.

“I always think that BGE stands for Being Good to the Environment.”

Three osprey chicks were rescued from a nest that caught on fire after being struck by lighting. BGE built a platform for the nest then went above and beyond – rehoming the chicks.

BGE’s Spring Gardens campus in South Baltimore is home to an official Audubon Bird-Friendly Habitat. BGE is the first corporation to earn this recognition!

Frontlines: How BGE Keeps the birds and bees happy with Integrated Vegetation Management

Back to School for the Kids: Goats Return to Towson University’s Arboretum

BGE extends the range of its EV fleet via solar panels.